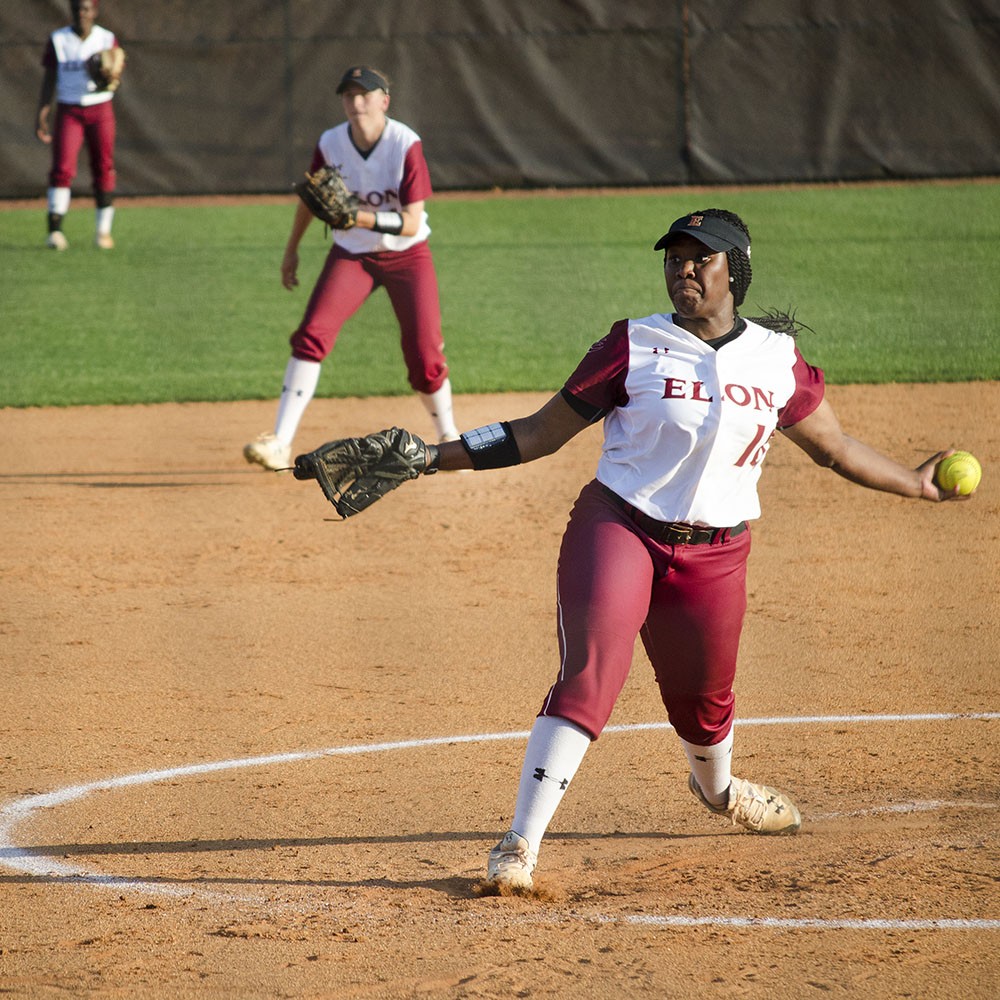 Aside from her contributions in leading the Phoenix to consecutive Colonial Athletic Association (CAA) conference titles, the senior thrower became the first athlete in program history to qualify for the NCAA Outdoor Championships in May.

But in 2016, Hames once demanded her team’s attention for something other than athletic reasons.

She called for something much bigger.

On Sept. 23, 2016, when hundreds of Elon students participated in a Black Lives Matter march, Hames and some of her teammates joined the rally. None of them were white. Hames, who is biracial, said she was frustrated with the lack of support from her white peers. And at a team meeting, she let them know exactly how she felt.

She says that statement sparked the conversation.

“That was like the first time our team had actually talked about it,” Hames said. “Like ‘Hey, these racial issues exist. We don’t feel comfortable in our environment. You guys are supposed to be our support systems and we should love each other unconditionally.’”

Hames said her team was very apologetic, and if a similar situation happened, her teammates would “110 percent be there.” But even if that’s the case, Hames and other student athletes say they face the same trouble as other students of color on a predominantly white campus.

According to the Elon Fact Book for the 2016-2017 school year, more than 80 percent of the student body on Elon’s campus identifies as white, with only 5.3 percent of students identifying as black or African-American. Just 2.3 percent identify as multiracial.

Hames said she feels supported by her teammates, but that doesn’t change that she feels overwhelmingly outnumbered.

“I came on a recruiting visit so I met all the athletes who straight up told me that ‘everybody is white, just know this,’” Hames said.

For many students the lack of diversity can be quite the culture shock. Some students come from high schools where they were one of many and are now in a place where they are one of the few.

“It was definitely a shock because obviously they talk about diversity and everything, and then you look around and it’s not as diverse as you would hope at times,” said sophomore Tyler Stanley, an outfielder on the baseball team. “You do feel like you’re the only black person in the room or in class or anything like that, and that can get tough.”

Minorities on campus are often subjected to a slightly different experience from their non-minority peers. Athletes say they face the same struggles, but in a different way.

“I think you find a lot more blacks on campus are on sports teams,” said senior pitcher Kiandra Mitchum, a member of the softball team. “I think if I weren’t an athlete, I’d really have to go out of my way to find that — different things to be a part of where I’m surrounded by people like me.”

According to Elon Phoenix Athletics, during the same 2016-2017 school year, 20 percent of student-athletes identified as black or African-American, a substantially higher percentage than the rest of Elon’s campus.

Student-athletes spend a lot of time with their team. From practices and weightlifting to team events and games, for some athletes their team can be their support system. For others, the support comes from a different group.

“I go to Fellowship of Christian Athletes every Thursday,” Stanley said. “We all kind of come together and just read the Bible, have a Bible study. At that time, you kind of get a support system, too, with people you feel like you can talk to because everybody there is pretty accepting, and that’s been a big help for me.”

Some student-athletes of color say they are also more commonly subjected to racially-based micro-aggressions.

“My hair is naturally very curly. So yes, I get the ‘Can I touch your hair?’ all the time,” Hames said. “Micro-aggressions have almost become a norm of Elon. This is daily. I overhear it, and you almost become immune because you’re like, well yup. My first year it was much more of a, ‘Oh dear God, you’re ignorant.’”

“I feel like in most of my classes, I usually don’t behave as I guess you say a ‘typical athlete’ would,” Stanley said. “I try to separate myself apart by being at the top of the class grade-wise and making sure I do my part to not give them the opportunity because if I do try to put myself in stereotypical athlete or black athlete, then that will allow them to kind of respond with the prejudice that they might have.”

All the stress and pressure of holding oneself to a high standard can severely impact one’s mental health. According to the Health and Human Services Office of Minority Health, African-Americans are 20 percent more likely to experience serious mental health problems than the general population.

Black student-athletes here at Elon still think there is more the university and the student body can do to improve the diversity on campus.

“Do a better job of bringing diverse students that are not athletes. We’re not your charity case… do a better job of making scholarships because the thing is this school is expensive,” Hames said. “Diversity is not going to change if you keep bringing people in that look exactly the same. There’s not going to be any diversity of thought if we’re sitting around the same people.”

Sometimes the best way to enable change is to start it yourself, the athletes said.