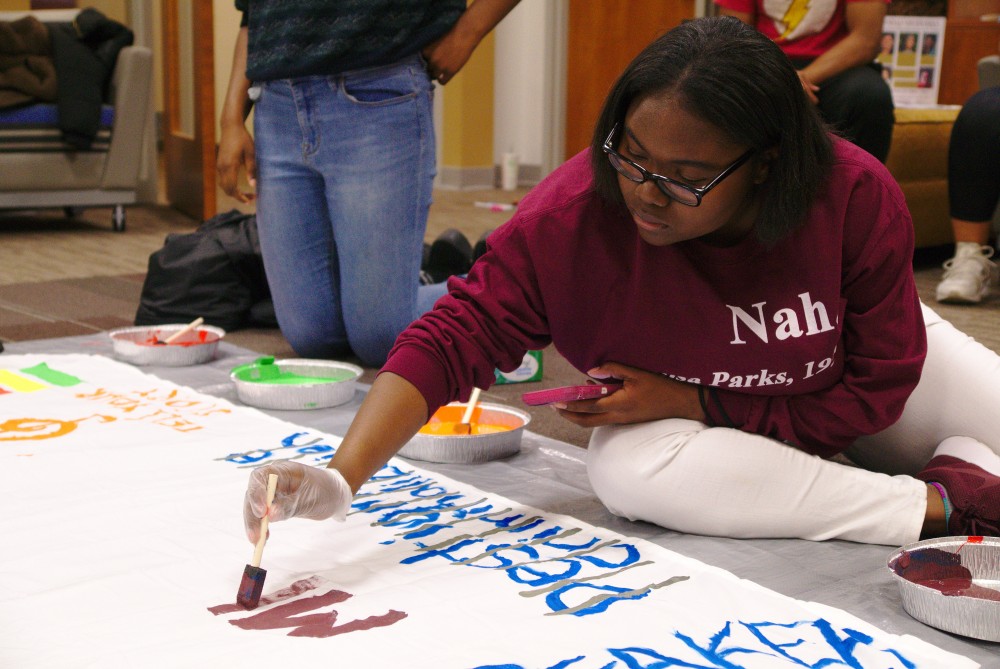 Freshman Mikayla Edwards paints her feelings toward black culture onto a blank canvas in the CREDE on Feb. 2. [Oliver Fischer | Elon News Network]

Now in its third year at Elon University, the Black Student Union continues to fight and advocate for the rights and representation of all black students around campus.

BSU originally stemmed from the Black Cultural Society, established in 1974. In 2015, several students under the leadership of Alex Bohannon ’17 decided the Elon black community needed more support than what BCS was providing.

“There was a huge need for change because BCS had become a fragment of what it had been in the past,” Bohannon said. “Throughout all of BCS, there was a general apathy about reaching the organization’s full potential.”

Instead of trying to repair what Bohannon felt was a broken system, he decided a more drastic change was necessary.

“We decided to get rid of the rot, and to do that we needed to start from the beginning, a complete brand change,” Bohannon said. “I wanted to create a structure that would support every black student, no matter what they were affiliated with on campus.”

With that mindset, BSU was formed during fall 2015 with Bohannon as its founding president.

Three years later, despite graduating, Bohannon continues to advise the students of BSU. In spring 2017, Bohannon visited campus and spoke to the new executive board leading the organization.

“You can’t come into this type of work assuming that it doesn’t mean anything. If the only reason you are here is for your ELR or your resume, then you got to go,” Bohannon said. “This work matters. If you’re here but don’t really care about the black student experience on this campus, then you don’t need to be here.”

Who BSU is today

Sophomore Derrick Luster, current president of BSU, was present during Bohannon’s remarks and shares a similar mindset about caring for the black student experience at Elon.

“All we want to do is provide a safe place for black students and a place of reference and refuge where they can go to feel comfortable expressing their identity,” Luster said. “Doing that has always been a priority for the organization.”

With the goal of maintaining a safe space for black students as the core of BSU, Luster has set other goals for the organization he hopes to reach during his term as president.

To lead this drive for more student learning, Luster knows he will need more than just hard work.

As president, Luster hopes more students will have the courage to join BSU and help spread its reach across campus.

“The only thing that separates an ordinary person from a leader is the willingness to act and do something about the problems in our society,” Luster said.

This drive to act is not the only aspect present within the BSU students.

Where BSU is going

As the organization’s advisor, Bell is looking forward to seeing what BSU will accomplish. But while action is important, both Bell and Luster want the organization to focus on facilitating the education of students. Luster said there are about 150 active BSU members.

“BSU is well on its way to helping students realize the interconnected nature of the world, the complex nature of themselves and their identities and how that connects them to each other,” Bell said. “If you want to be a member of BSU and want to get your hands into something, you first need to be willing to get your mind wrapped around something.”

Freshman Mikayla Edwards is one of the students ready to work.

After her first semester at Elon and with BSU, Edwards is already certain she wants to help lead the organization in the future so others can have the same experiences with the organization as she did.

“I joined BSU because I wanted to go somewhere where I felt comfortable,” Edwards said. “When I first got here, I didn’t see a lot of people that looked like me. It didn’t bother me, but I was like, ‘Woah, where all my people at?’”

While she is comfortable with being a minority on Elon’s campus, Edwards felt she had found her place at BSU.

“When I first arrived, I felt a little out of place, but coming to BSU and going to events and meetings has really helped me find my place here at Elon,” Edwards said. “I want to help someone else who is coming here find their place.”

Edwards is currently in the process of applying to be the BSU’s Vice President of Special Events. She believes this position will allow her to both help others feel welcome and spread the word about BSU.

“BSU is going to expand, and we are going to connect with other organizations, and I know we are going to do a lot more positive things not only at Elon, but also in our community,” Edwards said.

One of the most positive things the BSU wants to do is teach students to care more about others.

To sophomore Arianne Payne, vice president of BSU, fostering this care is one of the most important roles of the organization.

If enough people begin to care about all people, Payne hopes this will one day lead to an Elon that no longer needs organizations such as BSU to build support structures.

“I don’t want there to be a BSU. There shouldn’t need to be a group that advocates for the rights and representation of black students at Elon because I want that to just be the norm — that is our goal,” Payne said. “One day, I want to stop building these support structures for black students because they have already been built. I want this institution to get to a place where all of its students feel accepted and included.”