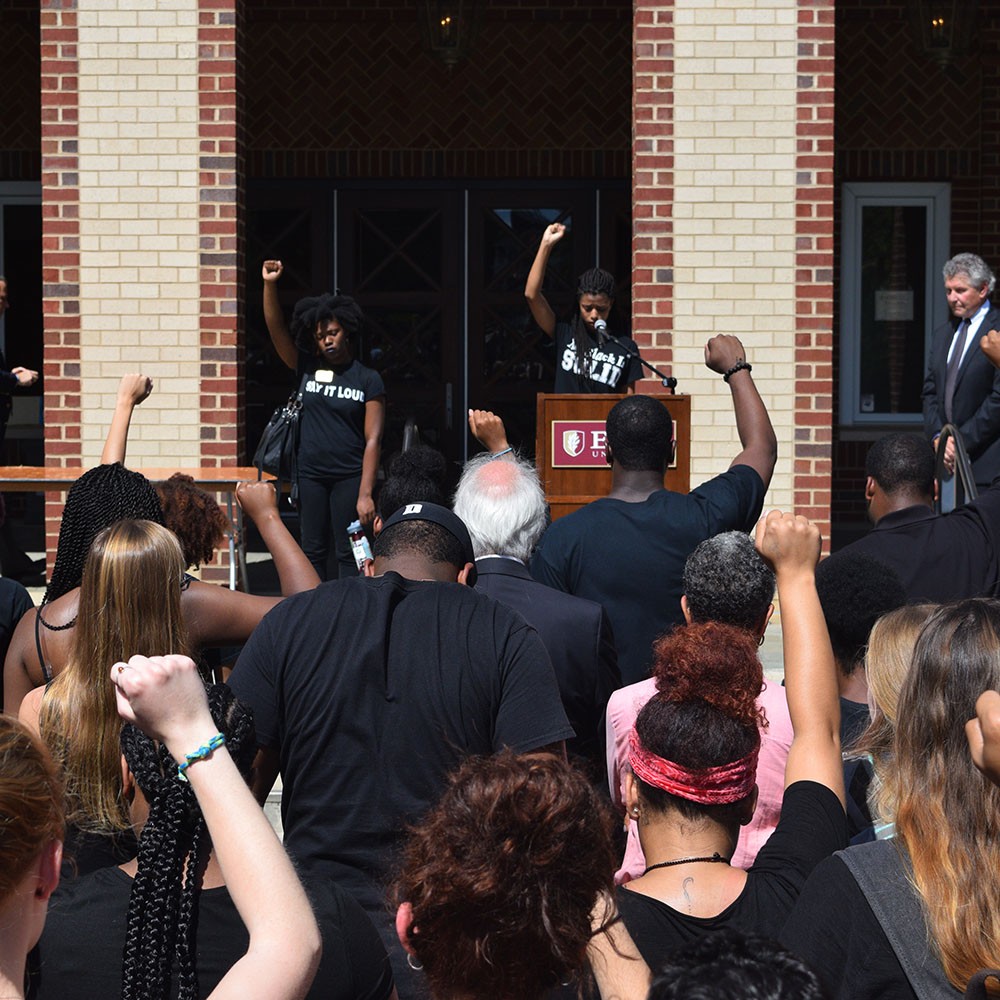 Addressing the state of the black Elon student

Last December, when Eugene Perry ’69 drove through Elon University, he felt the scars of his past.

It doesn’t matter how many years it’s been or how much an Elon education has blessed him. Perry said coming here gave him mixed feelings.

But though he’s revered as a pioneer now, Perry said his white classmates viewed him as a nuisance.

It’s been nearly half a century since Perry attended Elon, but the struggles he experienced haven’t left. They’ve simply morphed into new challenges for current black students. The statistics are clear: Elon’s student body is now 80 percent white. Only 5.6 percent of students are black.

For every seven black students, there are 112 white students.

And since 2011, a series of events including micro-aggressions, students being called racial slurs and a host of forums addressing inclusivity, show that while Elon has progressed significantly, there are still remnants of Perry’s era plaguing a university desperately trying to erase it. But while it may seem the work is incomplete, those at the forefront say making Elon more inclusive is a methodical fight.

But everyone needs to do their part.

“I think it’s important that your community reflect the world as best it can,” said incoming President Connie Book. “Who sits next to me matters, so we need to make sure that we’re doing a very good job to get Elon diverse so that people of all backgrounds can enter our education system and can contribute to it.”

But the findings still weren’t ideal.

The results spawned from a December 2014 survey that 749 students completed online. About 15 one-on-one interviews and focus groups with students and faculty also gathered data. Of the 63 black faculty and staff who participated, they said they heard 47 disparaging comments directed at them personally. Now, just more than three years later, Williams, who co-chaired the Task Force, said this still isn’t shocking. It mirrors the current national climate.

“I think that Elon is not an island; we’re not isolated from greater society,” Williams said.

“That finding was not surprising for me to see. People who are oppressed and all the reasons that come with it will filter into Elon, too. We are not insulated.”

The headliner for the report, Williams said, was Elon’s response. After collecting the data, Williams presented it to senior staff and to other offices. The Task Force also presented recommendations — almost six pages worth — to address these issues. Williams said it was “sobering” to hear these experiences from students and faculty. Everyone on the Task Force wanted to change this.

“Elon is a very planing institution,” Williams said. “We identify problems. We identify a team to address the problem. And we come out with a strategy to implement it. This one is important because we’re in essence trying to create a change in culture.

A progress report in November 2016 — the most extensive progress report available — outlined changes in five overarching themes: Admissions and Recruitment, Welcoming and Success, Curriculum and Classes, Campus Climate and Communication and Messaging. Elon restructured its admissions office by hiring Natalie Garza, associate director of admissions and director of diversity recruitment, after a nationwide search. Garza then hired Courtney Vaughan ’15 as assistant director of diversity recruitment. Her specific focus is targeting African-American candidates.

The admissions office also put more emphasis on hosting Evening in Elon events in areas with high African-American populations such as Atlanta and Washington D.C. Search committees for leadership positions at Elon — most notably the one that selected Book — include people of color. Williams and Jean Rattigan-Rhor, executive director of community partnerships, were promoted to serve on the president’s senior staff. The 16-member team now has two black identified people.

The report says each dean and department chair should develop strategies to advise students about classes promoting cultural competency. ‘The Black Man in America’ course was developed to address systemic racism and counts as a requirement in the Core Curriculum.

A living and learning community on dismantling racism is also planned to start within the next two years. Williams said this is an ongoing process, but he is excited about how it’s progressed.

“We’re continuing to round out recommendations and strategies,” Williams said. “I think it’s definitely had a positive effect for sure.”

But all the work won’t truly be complete unless students lead the charge. Senior Morgan Bodenarain, SGA executive president, said she isn’t necessarily tired of talking about inclusivity.

She is tired of the majority of students not taking action.

For every member on senior staff, there are 390 students. While she said the administration has done well, it’s up to the students to push the work forward.

Bodenarain said she’s used her platform for change, ranging from SGA legislation such as the Student Inclusive Campus Committee and hosting town halls with the Black Student Union. She said she is working for the “future me,” saying that if she doesn’t see tangible results before she graduates, she hopes to see them at Homecoming 10 years from now.

In the short term, as she prepares to leave office in March, her advice to the next president is to create a sense of action. Taking those conversations from SGA and having those ideas implemented in Fraternity and Sorority Life chapters, athletics and other club organizations is a start.

“Conversation is great, but there needs to be a little more action,” Bodenarain said. “It can be a little tiring to put in all of this work and feel like nothing is happening. But this is an ongoing process, and I don’t think any SGA president will say they did enough on this issue. SGA presidents from now until forever will have to focus on this.”

One of the recommendations in the Task Force was to have ongoing assessments every three to five years. In the fall, the 2018 Diverse Learning Environments Survey was released to students, which will be somewhat of a litmus test for the Task Force on inclusive issues other than just black students as well.

Book, who becomes president March 1, said inclusivity will be one of the key issues she’ll address. And ultimately, the goal is to give current black students a better experience than the one Perry had.

“There is no finish line for that work, and as you make progress, you empower the university,” Book said. “College campuses are complex places, and a lot of it has to do with emerging ideas that challenge precious beliefs.

“It often is these moments of interacting with each other where we learn how much work there is left to do,” Book said. “And we need to prepare our community for that.”