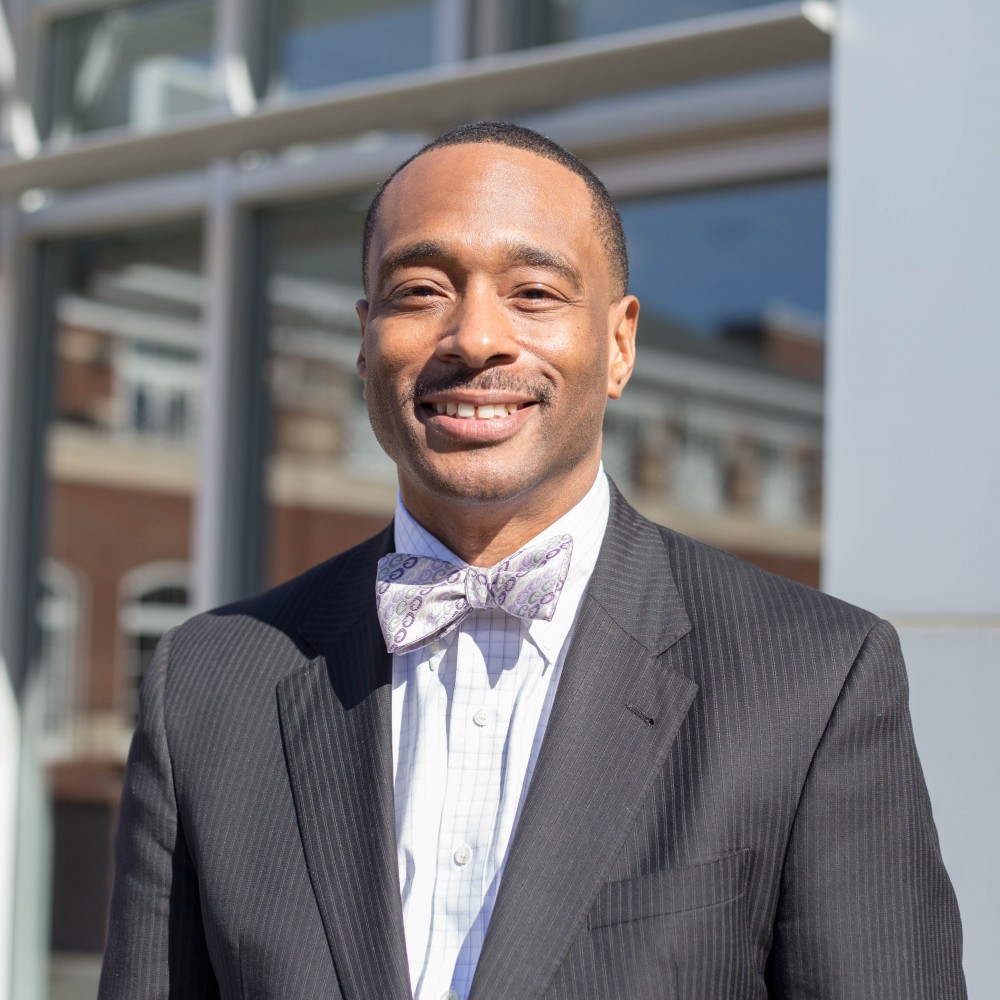 As one of only two black members on Elon's senior staff, Williams uses his challenging upbringing and perspective as a motivating tool everyday. [Mallory Siegenthaler |Staff Photographer]

The man behind the bowtie

If you see Randy Williams, he’ll probably be wearing a bowtie. Unless it’s a special occasion, that piece of neckwear will always be on him.

But many people don’t realize the struggle behind Williams having the opportunity to wear one everyday.

Some don’t even know that the bowtie and his credentials may have played a factor in preventing a violent police encounter.

Not even a full year into his tenure at Elon University, Williams, then a presidential fellow and dean of multicultural affairs in 2014, was stopped by a police officer and questioned during a traffic stop after a robbery of a nearby bank at Elon. Confused and dazed, Williams did something he normally doesn’t do.

Instead of using Randy, he gave the officer his full name.

“This was during a time where a number of reports of black men were actually being pulled over and killed by police officers,” Williams said. “I just wanted to do everything possible to put this white police officer at ease to not see me as a threat. Normally, I am called Randy, but I introduced myself as ‘Dr. Randolph Williams Jr., ’ thinking the title of Doctor or the official name as ‘Randolph’ would put this officer at ease.”

Elon’s culture greatly differs the Virginia neighborhood where Williams was raised. Williams, now associate vice president for campus engagement, said the police encounter was a simple reminder that his ascension from broken family doesn’t guarantee a pass from the negative perceptions which plagued African-Americans for centuries.

But that still doesn’t deter him from trying to make a difference.

Now, as one of only two black members on Elon’s senior staff, Williams said he strives to make Elon as inclusive as possible.

“The students I interact with now will one day be the leaders in our community that my daughters will look up to,” Williams said. “I feel a responsibility and a desire to be a role model for black students, especially at a predominantly white institution.By being a black face and wearing a suit every day and for students to see that, I carry a sense of pride and obligation when I wake up for work.”

The haves and the have nots

Before he earned his doctorate in higher education, Williams was simply an African-American boy primed for a life in the streets. At times, Williams voice cracked when he reminisced on his past.

Last year, Williams office in the Center for Race Ethnicity and Diversity Education (CREDE) was barren, with a naked bookshelf only housing a picture of his wife and children. Months before, books and decorations lined his space. After his promotion, Williams was given a new office across campus in Powell, the same building as the President’s office, where he currently works.

But while growing up, Williams didn’t have indoor plumbing.

“It blows my mind to think of where I come from,” Williams said. “I never imagined this.” Williams’ native ground of Lawrenceville, Virginia, has an average income just above $28,750, according to federal data. Washington Park, the neighborhood he was raised in, was notorious for drug dealing and other criminal activity.

“Not only was I hearing [former First Lady] Nancy Reagan talk about the war on drugs, but I was seeing this stuff in the neighborhood,” Williams said. “It was something that was seen on television that was right outside of my doorway as well.”

They were broke, but Williams said he and his friends were broke together.

“We were dirt poor and we knew it, but we were still resilient,” Williams said. “Being raised in that environment forced me to learn how to make the most of every situation.”

Unstable family life accompanied Williams’ struggles in his community. His father was a functioning alcoholic and eventually, his mother had enough. She divorced, causing Williams and his brother stayed with her.

“My mom was really getting out of a bad situation,” Williams said. “You can’t fault her for that. They had two young boys and were struggling financially. Add all of that stress in and that was a bad combination.”

“It taught me how I wanted to be,” Williams said. “Because of what he wasn’t as a father, it made me want to be that much more for my kids and my wife.”

Williams met his wife, Chiquita, in middle school and dated while at Brunswick High School. She was attracted to his “confidence and swagger,” she said. When they went to separate colleges, they were determined to make their relationship work.

“We just made our relationship a priority,” she said.

Williams earned a scholarship at Hampden-Sydney College where he majored in physics and played football. As he did in high school, Williams immersed himself in numerous activities. He was a resident advisor, a tour guide and also pledged into a historically black fraternity — Omega Psi Phi Fraternity, Inc., and he still proudly displays those Greek letters in a purple and gold plaque in his office. All of this was in an effort to make sure college did not go to waste for him.

Williams was one of 15 black students at Hampden-Sydney, which helped foster his love for diversity education. He advocated for a more diverse curriculum and more faculty of color. Three years after he graduated, the Board of Trustees created a diversity program and unanimously picked Williams to spearhead it. At first Williams said no, but the president hand selected him because he felt he was the right person for the job. Eventually, Williams changed his mind.

“I didn’t have any experience in this realm,” he said. “At this time, I was simply a high school physics teacher. But when the President called me, he said he needed me because of my passion. He said they would get me the proper training, but they couldn’t teach passion and that’s what I had.”

Williams climbed the ranks from being a program director to Associate Dean of Students at Hampden-Sydney in 1998.

In the next 16 years, accolades became commonplace.

He earned his master’s degree at Longwood University, enrolled at The College William and Mary and worked in the dean of students’ office while pursuing a higher education doctorate. He eventually became Vice President of Student Affairs at North Carolina Wesleyan College. But soon, he wanted more.

“I knew sooner or later that I would be leaving North Carolina Wesleyan for a bigger and different school, and Elon was on the list,” Williams said.

Once Williams arrived at Elon in 2014, he immediately found his groove. Chiquita said he’s excelled at Elon because he’s “had the ability to coach and be coached.” Some of those mentors include Jon Dooley, vice president for student life and even President Leo Lambert. For Williams, it has been the best of both worlds.

“At N.C. Wesleyan, Randy was the person that everyone had to look up to for advice,” Chiquita said. “Now at Elon, he has had the chance to be a mentor as well as a mentee. It has been great for everyone.”

Chiquita said that’s typical for Williams, even in his homelife. Through the craziness of raising a family while working a demanding job, she said Williams always keeps a level head.

“He is always that calming voice in the room,” she said. “He always knows what to do and how to go about it. When I’m frazzled, I always know I can lean on him”

Since his arrival, Elon has done just that — rely on Williams’ guidance and expertise to move the institution forward. Elon uses him in any way it can.

That translates to important projects and committees.

To date, Williams has been a member of the following initiatives: co-chairing a Presidential Task force for Black Student, Staff and Faculty experiences, leading the First-Year advisory committee, advising Fraternity and Sorority Life, co-chairing the implementation of the Presidential Task Force for Social Climate and Out of Class Experiences and was on the search committee for the Vice President for Student Life and Dean of Students, among other things.

It’s proven that people can be successful without such a hectic schedule as Williams. But he said this line of work is his calling.

“You can imagine how many meetings I go to,” he said. “But this is what I love to do. For me, this is a what I’ve been conditioned to do.”

Not leaving any time soon

Williams said the main reason why he loves his job is because of the students. Junior Kenneth Brown is one of the many students who have nurtured a mentoring relationship with Williams and said he is one of the reason why he feels comfortable at Elon.

“He is an example for me and every other black student on this campus about what it means to excel in life,” Brown said. “Dr. Randy is a role model to me and I hope to be like the man he is when I graduate.”

Williams said that he is looking forward to continuing to work at Elon and says that he doesn’t plan to leave anytime soon. And with a new position and a new office — and the same bowties — he said he is excited for the time ahead.