Six Elon veterans relive their lives in war and at peace

Driving a BioBus, teaching a class, directing Physical Plant, serving in the Registrar’s Office and working toward a Master of Business Administration are all jobs being done today by veterans at Elon University.

Students, faculty and staff walk past veterans every day without ever knowing what they did for their country.

Six Elon veteran’s years of service took each of them through many of the United States’ worst conflicts. By serving in Korea, Vietnam, Lebanon, Iraq and Afghanistan, some saw conflict as early as the 1950s and as late as 2012.

Elon has more than 20 veterans on campus, according to the Veterans Day Committee. The U.S. Department of Veteran Affairs reports there are almost 10,000 veterans in Alamance County alone.

With Veterans Day on Nov. 11, the Elon community will gather to honor the men and women of the U.S. Armed Forces.

Team Hero, a student organization dedicated to supporting veterans and active service personnel has been working closely with the Veterans Day Committee to organize the ceremony.

“It is so important to recognize the people who have sacrificed so much to give us the opportunity to live our lives and go to a school like Elon,” said sophomore Isabella Ponterio, president of Team Hero. “It is easy to forget there are people behind the service.”

Veterans on campus opened up about their experiences in the service, how it changed their lives and how it eventually brought them to Elon. 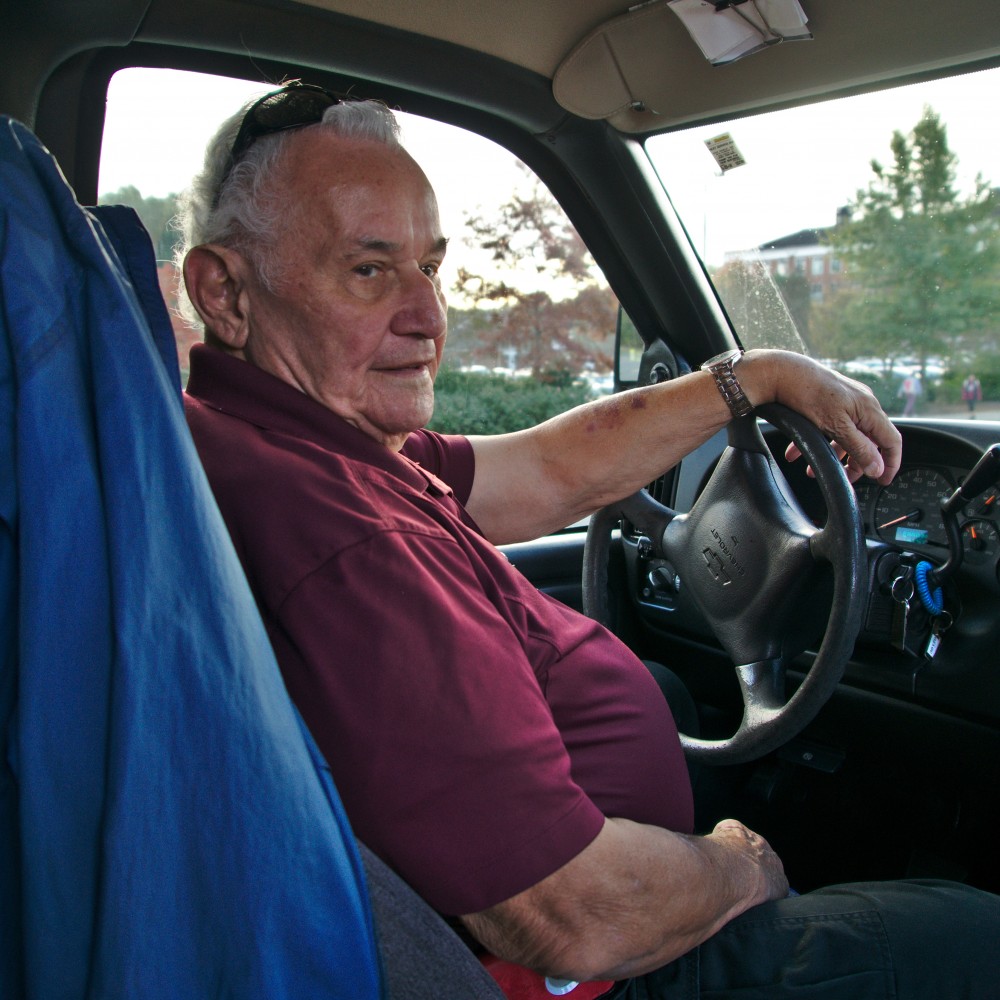 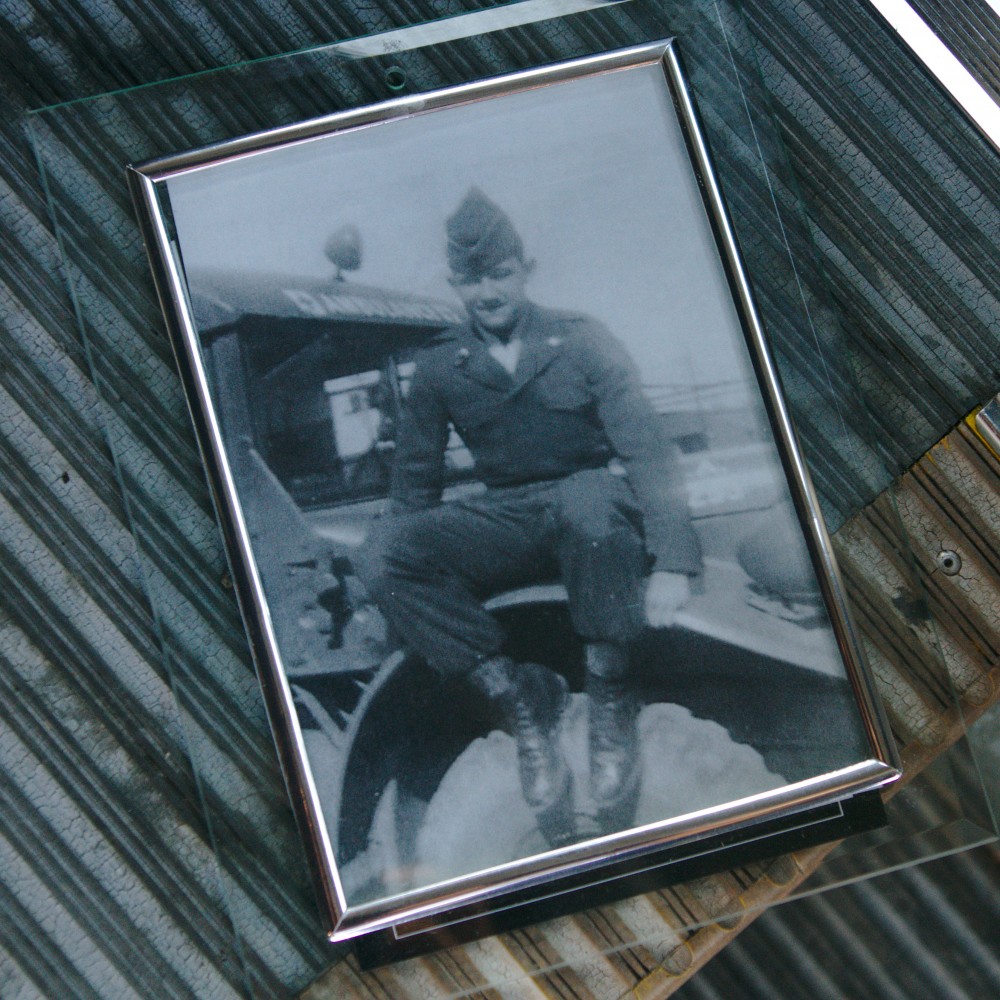 Sitting atop the ambulance he would later drive in Korea, Crayton poses in Okada, Japan, in 1953 before being sent to war. [Photo courtesy of Billy Crayton]

The Universal Military Training and Service Act passed in 1951, led to the induction of more than 1.5 million men into the military during the Korean War. But Billy Crayton was not one of those men.

“I went in on my own accord,” Crayton said. “I volunteered because I wanted to go.”

As a corporal in the U.S. Army, Crayton served in the Korean War in 1953 by driving an ambulance for the 1st Cavalry, 15th Medical Battalion. He transported wounded soldiers from the frontlines of the conflict to aid stations where they would receive vital medical attention.

“It was scary. You had a big red cross on each side, each end and one on top,” Crayton said. “They weren’t supposed to shoot at the ambulance, but that was the biggest target they had, believe me. I was glad to get out of there.”

Despite the fear of driving from the frontline and back, Crayton knew this job is what his country needed him to do most. The experience changed his life and armed him with skills to be later used in civilian life.

“There was a whole lot you could learn,” Crayton said. “And a whole lot you didn’t want to remember.” Crayton has translated those driving skills and is now a BioBus driver for Elon University. 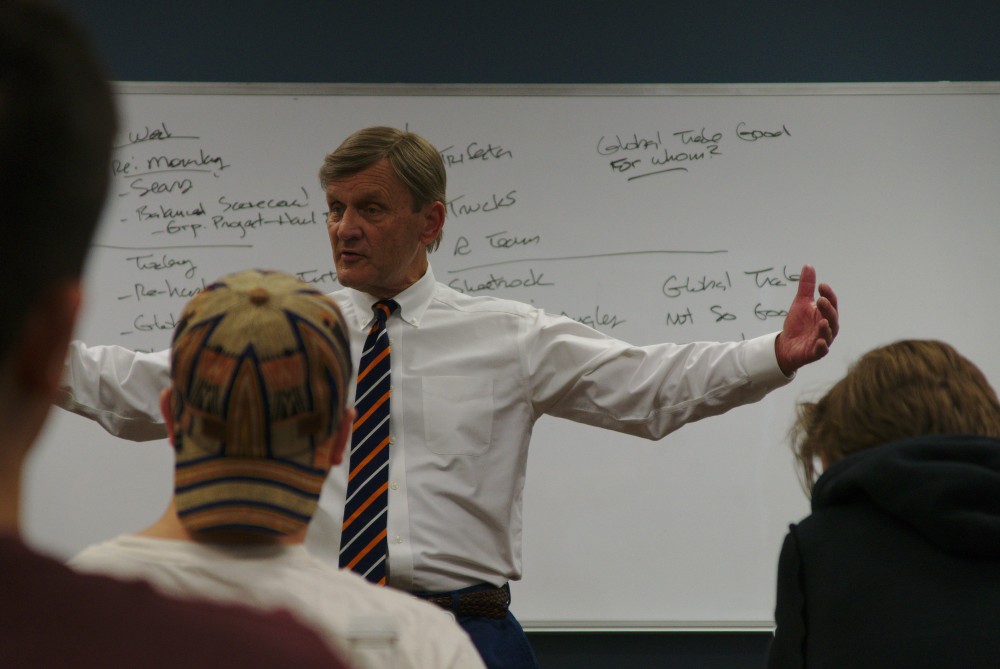 Growing up in a military family, Bill Burpitt enlisted in the army in 1966 at the age of 20.

With the rest of the 1st Aviation Brigade, Burpitt served in the Mekong Delta region during the Vietnam War from 1967-1968. His service taught him to be more aware of the fragility of peace.

“I became very cautious about assumptions regarding the stability of this cocoon of peace we live in,” Burpitt said. “We can lull ourselves into thinking, ‘I’m fine, I’m safe,’ without realizing that chaos is just on the other side of the wire.”

During the Tet Offensive of 1968, one of Burpitt’s friends was killed in action. When brought home, Burpitt visited the parents of his fallen comrade and continued to do so throughout the years. Only then did he realize the constant pain gold star families carry with them.

“Their tours of duty went on for years and years. Parents who have lost children in the service have also served their country. They paid a much more painful price and for much longer,” Burpitt said. “When I go home I can drop my gear in the closet and forget about the war, but the parents of those soldiers that never came home — they can never forget.”

Serving in the military later allowed Burpitt to continue his higher education. This eventually led him to Elon University where he now works as a professor of management and as the head of the Veterans Day Committee. 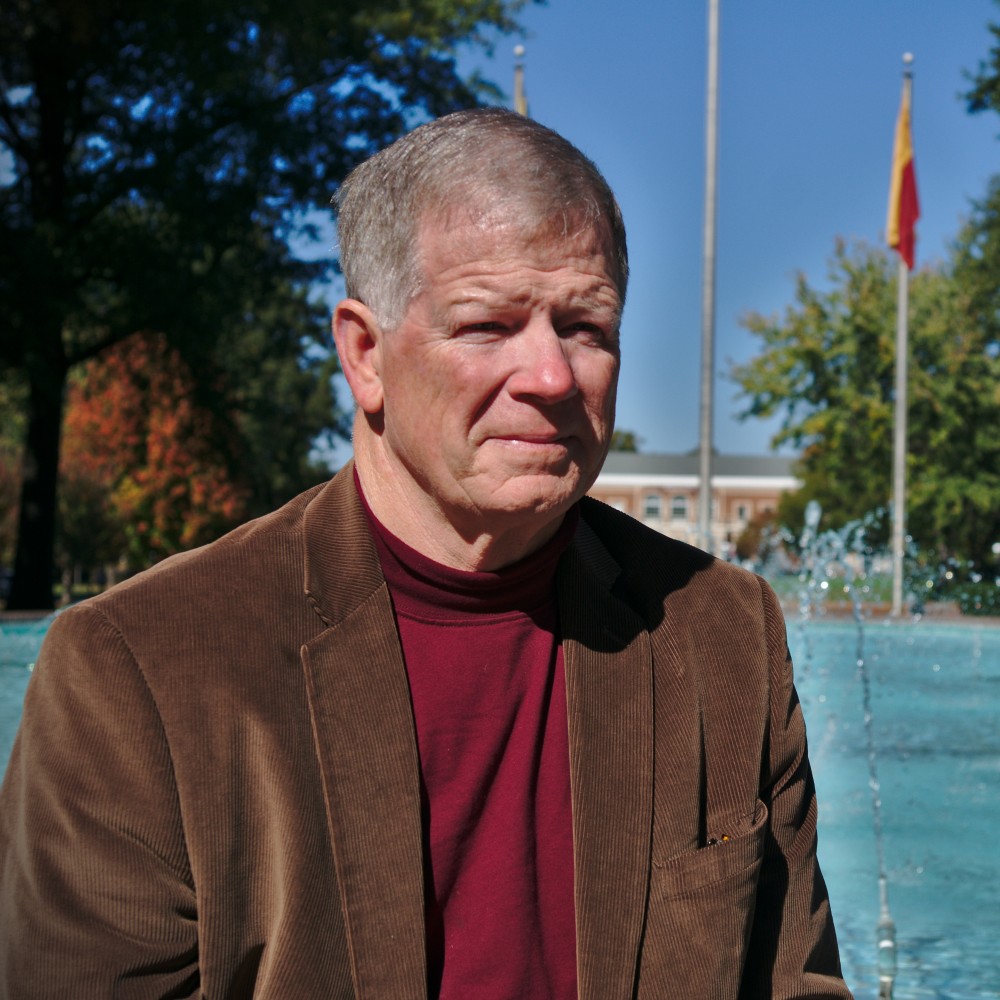 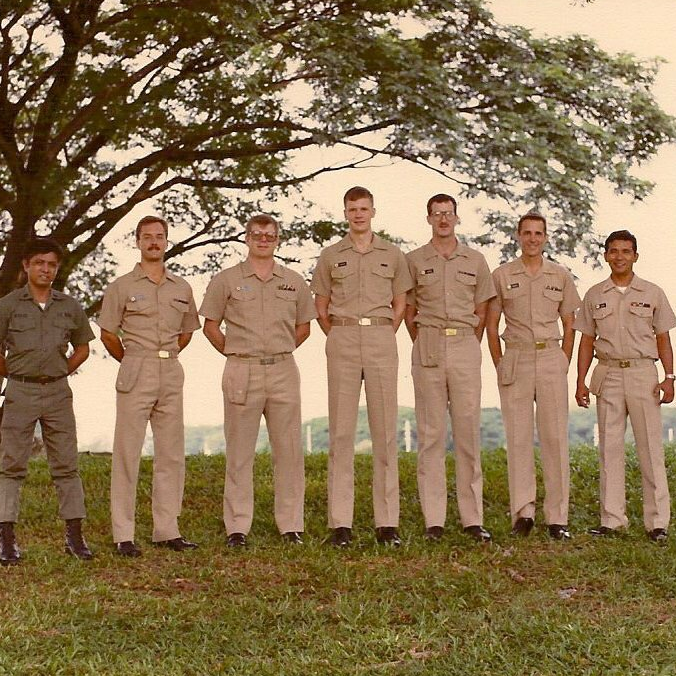 Buchholz (third from left) poses in Clark Air Base in Manila, Philippines, with other members of the Navy Construction Office. [Photo courtesy of Robert Buchholz]

Post Vietnam, Robert Buchholz knew the military needed men to fill the ranks. After graduating college, he joined the Civil Engineering Corps in 1976 planning to serve for only three years, but he ended up staying in the Navy until 2002.

Twenty-six years of service took Buchholz all over the world and into the center of the Lebanon Crisis. Buchholz’s time in Beirut came less than three weeks after the deadly 1983 Beirut barracks bombings. The attacks were caused by two suicide bombers driving garbage trucks laden with explosives that killed 241 U.S. Marines and 58 French Peacekeepers. Buchholz and the Civil Engineering Corps were ordered to handle the aftermath of this attack.

“It was something to see, — the destruction that a garbage truck could do,” Buchholz said. “Our unit was redeployed to build up defenses and restore power to that part of the area.”

After Lebanon, Buchholz was sent to the Philippines to oversee construction of Clark Air Base, which was the United States’ largest overseas Air Force base at the time.

“I’ve worked in all sorts of situations and it’s amazing what people do when they step up and do what has to be done. I enjoy working with people like that,” Buchholz said.

At Physical Plant, Buchholz says he is surrounded by similarly hard-working individuals.

“The people that I worked with in the Navy are the same type of people that I work with now in the Physical Plant,” Buchholz said. “They work hard. These guys pull together and do what needs to be done, and I love working with people like that.” 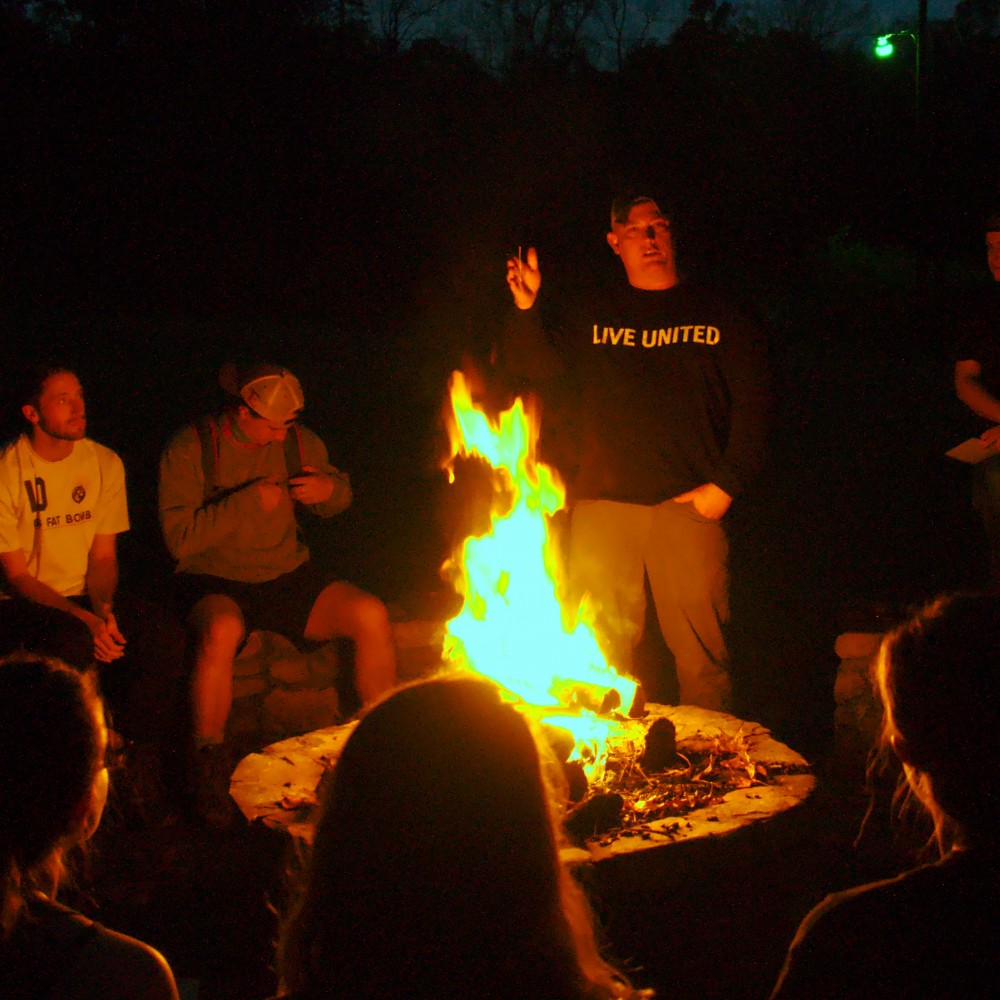 Rodney Parks speaks to his “Wilderness and Adventure Therapy” class around a bonfire at the ropes course Nov. 6. [Oliver Fischer | Contributor] 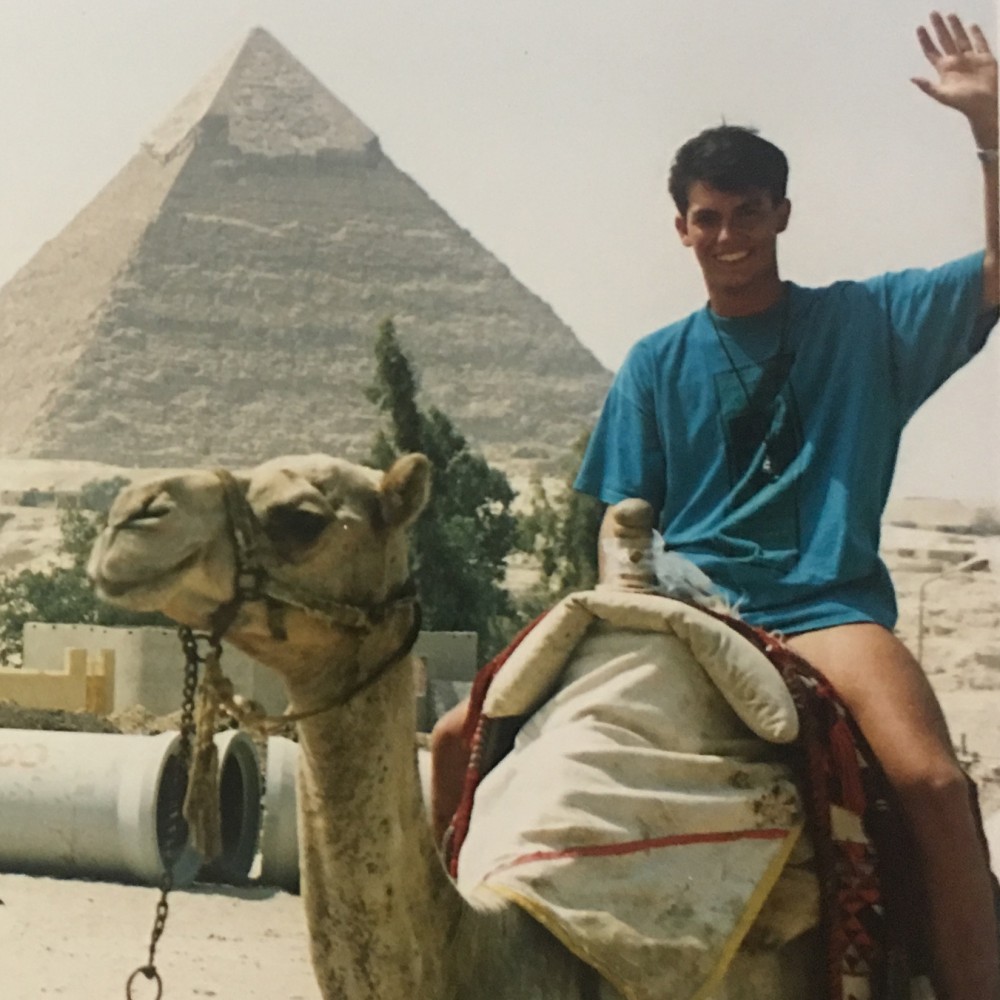 As the son of a Vietnam veteran and a lead miner, Rodney Parks was faced with two choices at the age of 18 — the mines or the military. The Sunday after his high school graduation in 1988, Parks was on a train to boot camp.

In the Navy, Parks became a hospital corpsman specialist and was deployed to Italy where his tour was cut short by the start of Operation Desert Storm in 1990. Parks was redeployed to Egypt where he served throughout the majority of the Gulf War.

At the end of the conflict, Parks was sent to an army hospital in Germany to aid the wounded coming directly from the frontlines.

“We didn’t have a lot of casualties from the fighting, but we had a lot of injuries,” Parks said. “The wounds were pretty vicious — especially the gunshot wounds. We would do the best to piece them back together and send them on their way.”

While serving in the hospital led to long hours of stress and focus, Parks knew he was making a difference.

“Being there and just helping really made you feel that you were performing a good duty for the work that you were doing. It was valuable,” Parks said.

Following the end of the Gulf War, Parks taught at the school of health sciences at the Naval Academy and later went on to work in the registrar’s office at the University of Georgia. His work at UGA led him to Elon University, where he now works as the university registrar, assistant to the provost and an assistant professor. 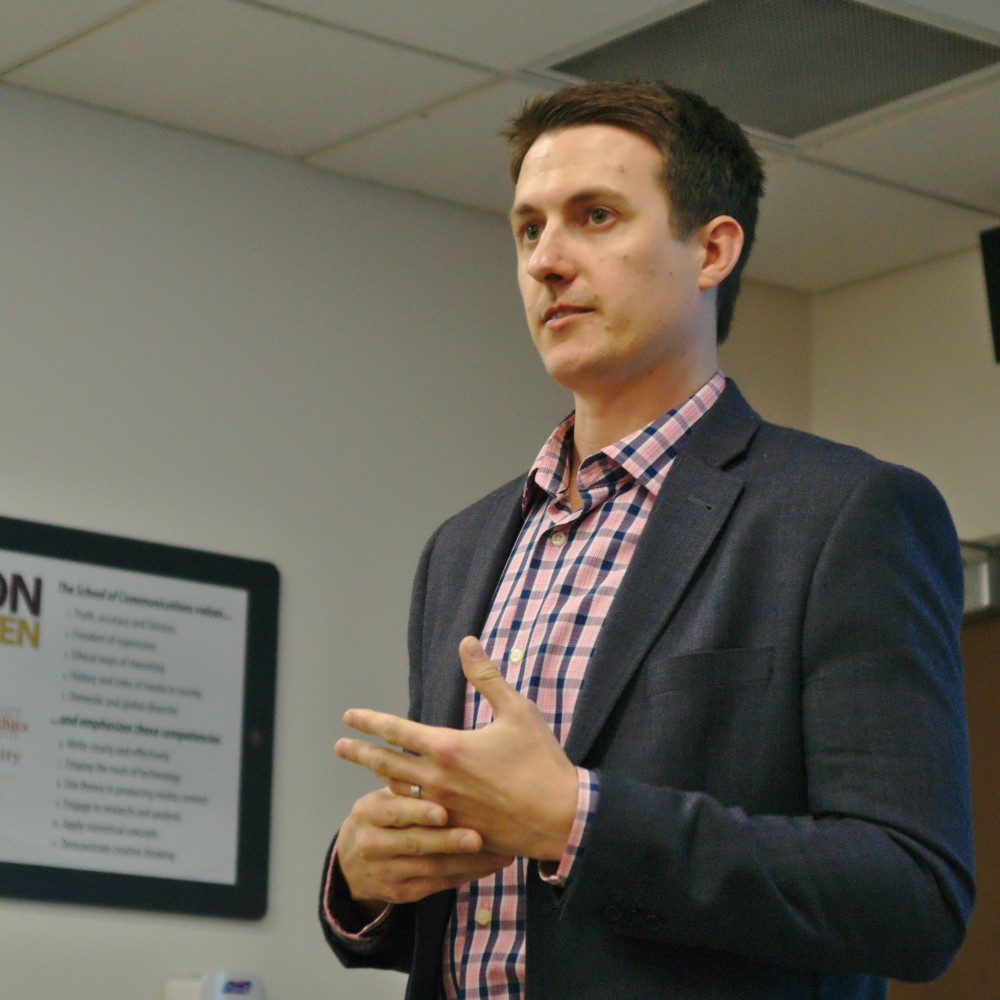 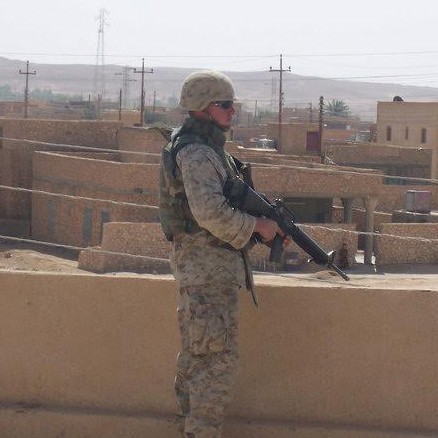 Luchsinger stands on top of a Iraqi police station in al-Anbar Province during a security patrol in 2005. [Photo courtesy of Alex Luchsinger]

The challenge and discipline of the Marine Corps led to Alex Luchsinger’s enlisting in the military at age 18.

Within three years, Luchsinger was deployed to al-Anbar Province, Iraq, as a soldier in a Security Battalion. It was his mission to protect the convoys traveling throughout the province.

“From day one in Iraq it was very intense,” Luchsinger said. “It was a very violent year … we would have IEDs on every single convoy.”

In 2005, during a security patrol in the city of Khan al-Baghdadi, Luchsinger’s vehicle was hit by an Improvised Explosive Device. The explosion resulted in a traumatic brain injury, the effects of which he still feels today.

“I still have some lingering effects like headaches and dizziness,” Luchsinger said. “But overall the recovery has been fine.”

For his injuries, Luchsinger was awarded the Purple Heart. He then retired from the Marines in 2006, but that was not the last time he would be in combat. After earning his undergraduate and master’s degree, Luchsinger was hired by CBS News.

As a journalist embedded with the 1st Battalion, 3rd Marines, Luchsinger was deployed to Helmut Province, Afghanistan, in 2011. This deployment caused him to reflect on civil-military relations.

“There is a big gulf between the veteran and the civilian populations,” Luchsinger said. “A sociologist at school once said to me, ‘When a democracy goes to war, everyone should share the burden.’ And that has just not been the case.”

After Afghanistan, Luchsinger returned to the United States where he is currently finishing his first semester at Elon University as an assistant professor of communications.

“I’ve really liked Elon so far,” Luchsinger said. “It has been a good fit for me here.” 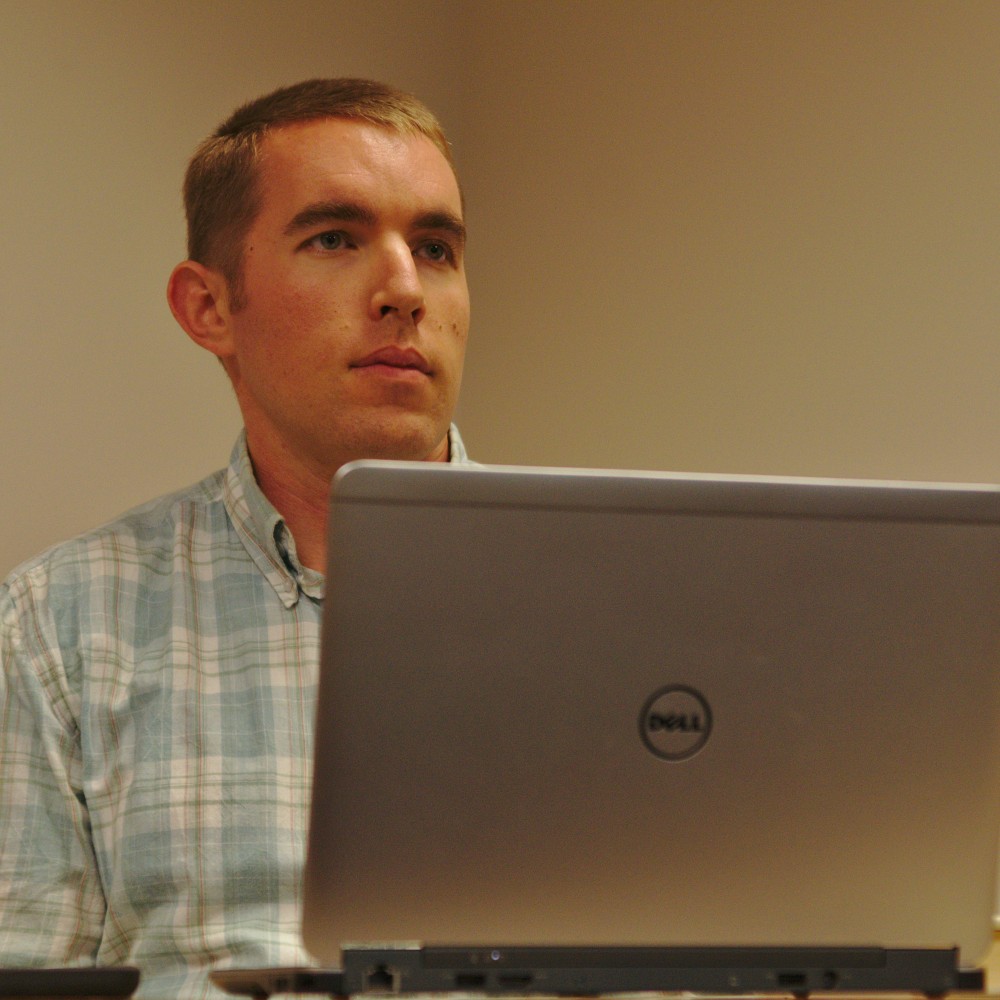 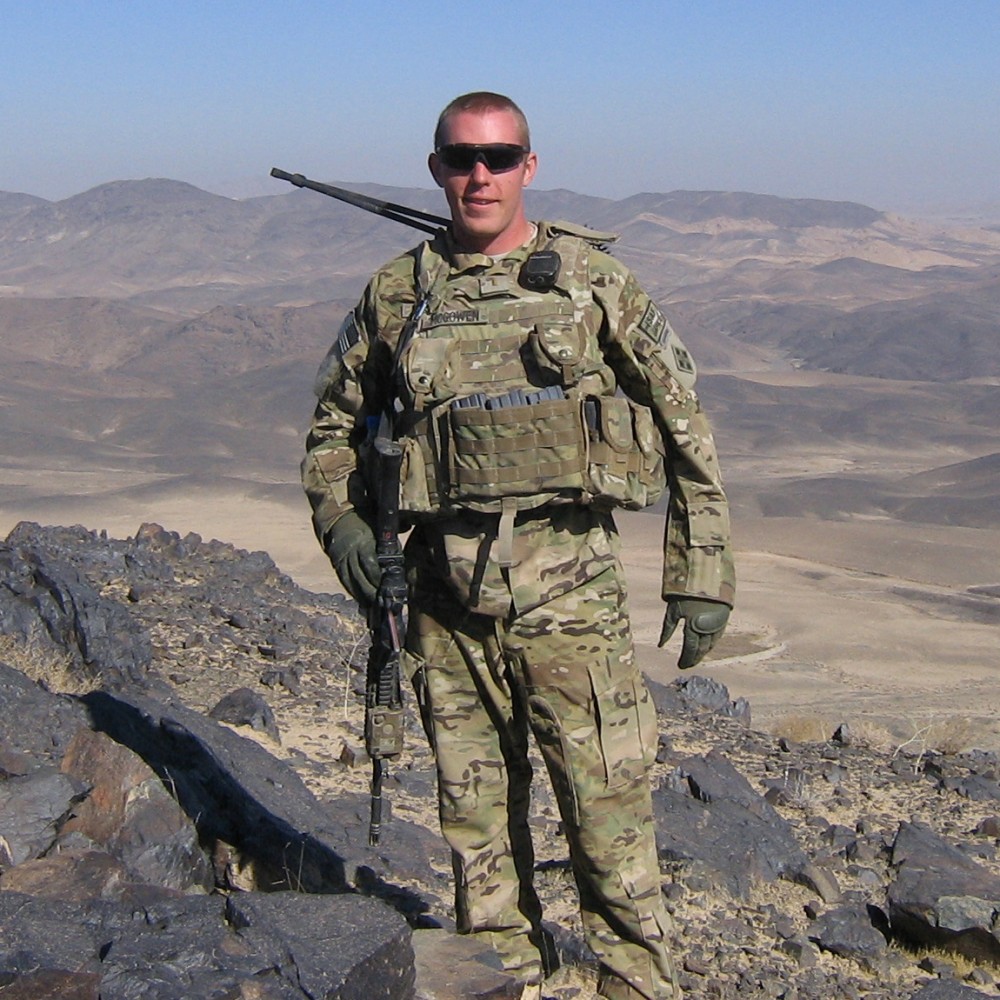 Will McGowen had always felt the call to serve in the military. And after 9/11, he knew it was a call he needed to answer.

“I was at a very pivotal age for Sept. 11, but really for the long drawn out wars in Iraq and Afghanistan,” McGowen said. “I felt the country needed as many people as they could get, and I would rather go then someone else go. I was young, I was able-bodied, I was single. It just made sense to me.”

As a captain with the 4th Infantry Division, McGowen was in charge of a combat outpost in Kandahar Province, Afghanistan. For nine months he faced the dangers of insurgency.

“It was crazy. We would do daily and nightly patrols to try to reduce the hold that the enemy force had on the local population,” McGowen said. “We worked a lot with the police and the Afghan National Army, training them to take a lead in everything we were doing.”

After returning from Afghanistan, McGowen began his job search and found Glen Raven, a fabric manufacturing and marketing company where he now works as a manufacturing manager.

On top of work, family and his reserve service, McGowen is also pursuing a Master in Business Administration at Elon.

“I chose Elon because I wanted the in-person learning,” McGowen said. “I’ve had some really good classes, good professors, learned from other students and am looking forward to continuing my education.”

McGowen is aiming to graduate from Elon with his MBA in May 2019.