From president to professor: Leo Lambert prepares for life outside the spotlight

eo Lambert’s tenure as president of Elon University began with the words “You have made an excellent choice and we are glad to have you join us on this journey,” given during his first New Student Convocation address Aug. 26, 2000.

Nineteen years later, Lambert’s presidency is in its final days — officially ending March 1, when he will turn over his position to Connie Book.

The soon-to-be president emeritus said he is prepared —and excited — for his life outside the presidency. Now, the rest of the Elon community must prepare to adjust as well.

In his last month as president, Lambert took time to reflect on his career and his accomplishments.

“The thing that I am proudest of is that Elon has undergone a lot of change in the last 19 plus years, but we’ve maintained a very student-centered culture,” Lambert told Elon News Network. “Despite all the changes … at the heart we have maintained a very strong set of values as an institution and worked hard as a community to practice those on a daily basis.”

Elon’s campus has grown significantly since Lambert first arrived. More than 100 buildings have been built or acquired during Lambert’s presidency. But in his 19 years here, he has grown as well. 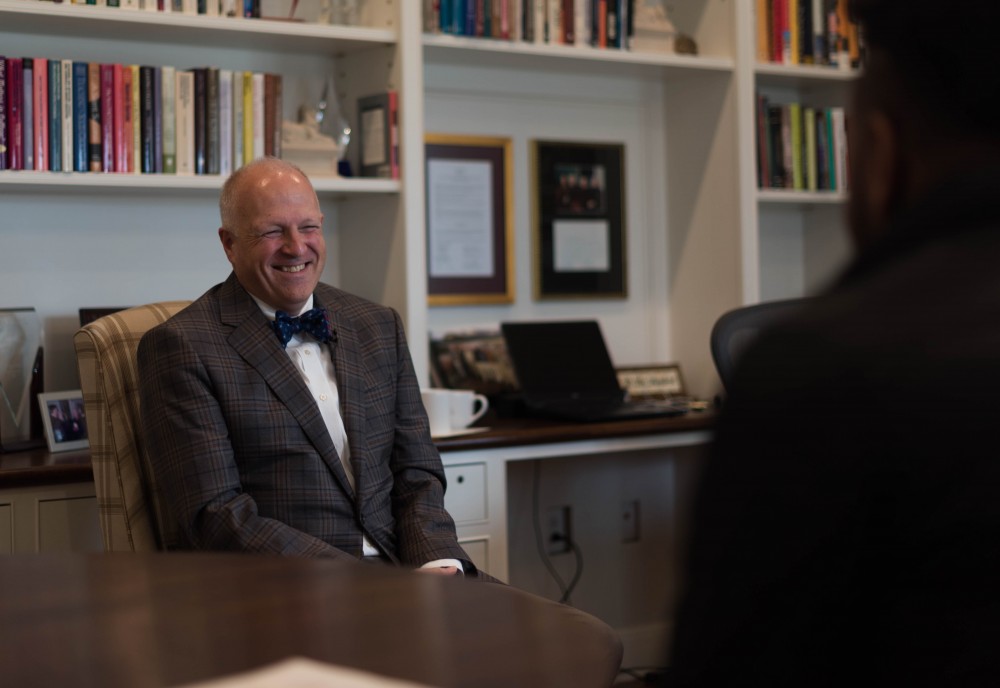 "At the heart we have maintained a very strong set of values as an institution and worked hard as a community to practice those."

Steven House, provost and executive vice president of Elon, works closely with the president and has watched him change over the years.

“When [Lambert] came, as you can imagine, [Smith] Jackson was the star on campus, and President Lambert was still learning about the university,” House said. “As time went on, he got to know the students extremely well, and now he’s the rock star on campus. [He also] has a more national presence — he is known across the country and is looked to as a senior president. People look to him because they want to know what he is thinking.”

Lambert’s co-workers attribute his ability to keep the institution student-focused to his strength of connecting with students.

“President Lambert is student-centered,” House said. “He is learning-centered, and he really knows how to get the best out of us when it comes to thinking of new things that we want to do. What we always ask is, ‘What’s the best for the students? How can we help them learn? And how can we really work to transform their lives?’” House was hired by Lambert in 2001 as dean of Elon College, The College of Arts and Sciences. In 2015, House was promoted to his current position as provost and executive vice president. Lambert is one of the reasons House has stayed at Elon for the past 17 years.

“He’s just a joy to work with,” House said. “We have a great relationship, and it’s one of the reasons I’ve stayed at Elon all this time.”

Working with Lambert is a joy many students have been able to experience, as well.

“It’s sad to see Dr. Lambert leave. I love Dr. Lambert, but I’m not as sad as I could be because I know Dr. Lambert will still be around,” SGA Executive President Morgan Bodenarain said.

Bodenarain is glad Lambert will continue to work with students outside his role as president emeritus because to her he is “the Dr. Lambert, and he will always have that impression on students.”

Bodenarain’s experience as SGA executive president will certainly be different from her successor’s, junior Kenneth Brown Jr., who will take on the role during Book’s first year as university president.

“It will be a bit of a change, but we are just going to have to see what happens,” Brown said. “It will probably be more different on the transition side — with helping to celebrate and honor Dr. Lambert while also helping Dr. Book get to re-know the campus.”

A transition of presidency like this hasn’t been seen at Elon for the last 19 years. Brown can’t wait to see this take place during the new year.

“We don’t know what that is going to look like but we are just going to go with the flow,” Brown said. “It adds to the excitement of what the year might bring.”

Lambert plans to take a yearlong sabbatical once he leaves office. Though this sabbatical is temporary, Lambert said he plans to enjoy it to the fullest — away from campus at an “undisclosed location.”

“On March 1, my wife and I are heading on a vacation,” Lambert said. “We are going somewhere warm and sunny and we are getting out of dodge.”

When his vacation ends, Lambert said he will be back in town, but he will continue to keep his distance.

“My first year ... I’m going to have a very low profile,” Lambert said. “I’ll be back on campus anytime Connie needs me to be here, but I am going to be gone for a year, essentially.”

Lambert will be back for the class of 2018’s commencement ceremony where he will be delivering the commencement address, as requested by the senior class. But he said it’s important he avoids the brick paths for awhile to let Book adjust to her new position.

“It’s very important to step away for a year and allow Dr. Book to establish her own presence on campus without having the former president too close by,” Lambert said. “The university can only have one president at a time, and I really want to step away from that responsibility.”

Lambert learned of the importance of a university president’s first academic school year in 1999-2000, during the first few months of his own presidency.

“[J. Earl] Danieley was a great supporter and encourager and a friend of mine and visible on campus, but never once in all the years that we were friends was there any confusion of who the president of the institution was. That will be very much the same thing for Dr. Book and myself,” Lambert said. “When I come back as a professor and as president emeritus, Laurie and I look forward to engaging with the campus — but in a different way.

“We’ll still be around and participating fully in the community, but not as the president of the institution.”

Lambert’s preparation for the transition has made him look at his own presidency as it comes to an end.

“I don’t have regrets, and obviously there are things that with the benefit of hindsight you might do differently, but that’s probably for others to judge,” Lambert said. “We know who we are as an institution, we know what we care most about, which is students and learning and we haven’t lost our way in that regard.”

This hindsight is what Lambert said he hopes to use to write his new book, a project he plans to pursue during his newfound free time.

“I have to get out of this job so I can get to work,” Lambert said with a laugh. “My new life on sabbatical is going to be a lot of reading, writing, a lot of thinking, very contemplative in a way, but it’s really fun to think about tackling a big project like a book.”

House said that though he hopes Lambert enjoys his sabbatical, he’s looking forward to having him back.

“I know he’ll be back, and he’ll be supporting us and helping us get even better,” House said. “He has taken Elon to the national level, and he will continue to do great things for the university.”

Lambert’s future work here at Elon won’t be behind the desk of the president’s office in Powell building, but in a new office in the Martin Alumni Center, tucked away in the back of the building with a desktop filled with papers, books and pictures of his family.