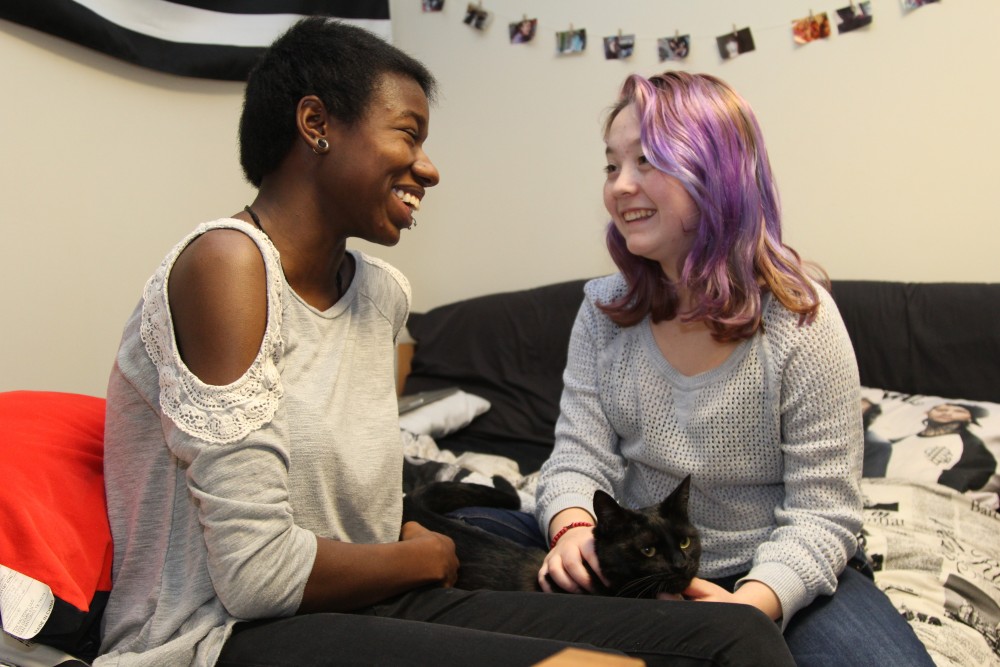 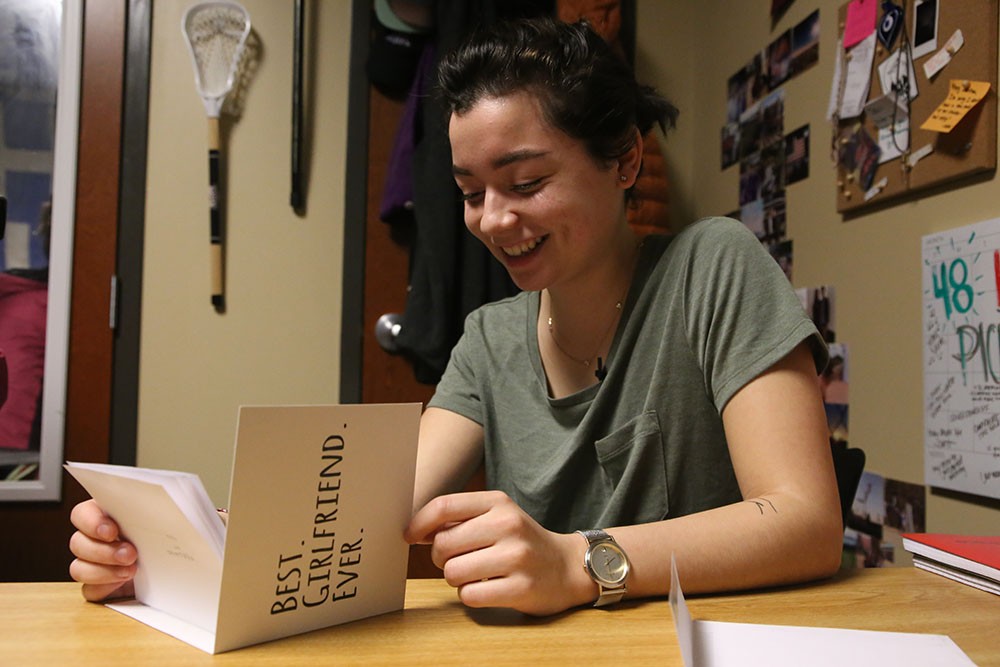 Freshman Jubitza Figueroa reads a poem from her collection that she made for her girlfriend titled “Feelings Ft. You.” [Anton L. Delgado | Enterprise Story Coordinator]

How LGBTQIA students celebrate their love on a typically heteronormative holiday

Their friendship began with a simple text over Thanksgiving break.

A few months later, freshman Jubitza Figueroa started asking questions, “Are we just friends or are we more than that?”

By January she found herself happily in love and dating her best friend, her girlfriend.

“I love Valentine’s Day … I want to make everything memorable. Living your life should be a novel-worthy experience and I don’t ever want her to look back on our relationship and think that it wasn’t the very best,” Figueroa said.

“Hopefully this will be a night she will forever remember. Fifty years from now if someone ever asks ‘What was your best Valentine’s Day,’ hopefully she will be able to bring me up. I want to be that level of romantic.”

Of the 1648 freshmen students on campus this year, almost 8 percent consider themselves non-heterosexual, according to the Gender & LGBTQIA Center. For those students, Elon is one of the best campuses to be on in the state.

According to the Campus Pride Index, a nongovernmental organization fighting for more LGBTQIA-inclusive policies, programs and practices, Elon is the most LGBTQIA-friendly campus in North Carolina.

But though Elon is considered an LGBTQIA-friendly campus, not all Elon students have the same romantic experiences simply because of who they care about.

Fours years after coming out as lesbian, Figueroa is currently in the second month of a relationship with another Elon woman, who did not want to be identified.

Despite being completely safe and comfortable on campus, Figueroa has realized she can’t be as open about her relationship as she would want. Expressing her feelings is the most important part of her relationship, she said. But Figueroa hesitates to show those emotions in public.

“I’ve walked around campus with her and I make it a point to not say certain things, do certain things or look at her a certain way which is disheartening because you should never feel that you can’t show affection to the person you care about,” Figueroa said.

Figueroa and her girlfriend often leave campus to enjoy the town of Burlington, but she feels her relationship being the judged the most during these excursions.

“You never know who you are going to encounter or what someone is going to say, especially in Burlington, which isn’t the most liberal area,” Figueroa said. “Being on campus in the Elon bubble is one thing, but off campus — that’s a whole different story.”

“When we go out in Burlington it’s a lot different than Elon,” Lynn said. “I went to a roller skating rink for my birthday and you could tell the vibe is not the same as at Elon and we couldn’t be exactly fully into our relationship at that place.”

This is a feeling Figueroa believes most heterosexual couples have not felt during their walks around campus or on their dates in surrounding towns.

“For heterosexual couples it’s not something you have to think about and you can see it in the way they interact with their partners,” Figueroa said. “Sometimes I wish it was easier, but it’s just what’s happening today.”

But while on campus, Figueroa and other LGBTQIA students, such as freshman Braedyn Robson — who identifies as gay — feels safe to be themselves.

“I wasn’t as nervous as I thought I would be coming into Elon openly gay,” Robson said. “One of the reasons I chose Elon was because it is known for being one of the more accepting schools in the South.”

Having mixed feelings about Valentine’s Day at Elon is not uncommon for LGBTQIA students.

On any other day of the year, Figueroa may be cautious about showing her affections for her girlfriend in public.

But Valentine’s Day is the one day where she won’t be thinking about others.

Though her girlfriend is not publicly out about her sexuality, Figueroa is looking forward to trying to give her the best Valentine’s Day possible.

But Valentine’s Day might not be a such a magical day for everyone. Junior Amy Belfer, who identifies as queer, said the festivities may have a negative effect on people.

“Valentine’s Day is often very heteronormative and often specifically for male and female relationships,” Belfer said. “I do like the idea of having a day just to love one another and just show your appreciation for your friends and people you are in relationships with. But I can also understand why it can be very isolating for people who are single.”

Robson, who is currently single and has never spent a Valentine’s Day in a relationship, said she doesn’t put much thought into the holiday.

“It’s much more of an adolescent holiday — I don’t think it really means much to adults,” Robson said. “If I was in a relationship it would be cute. But it wouldn’t severely impact anything if the person I was with didn’t want to celebrate it. It doesn’t really seem like a real holiday to me, it’s not really for anything, other than to just show someone on a special day that you care about them.”

For those in the LGBTQIA who are trying to make Valentine’s Day more special, finding gifts that align with their relationship has been more difficult.

“When I look around and see very stereotype and labeled ‘him and her’ gifts it is disheartening because it was prepackaged for heterosexual couples,” Figueroa said. “I do think we could do better as a society and make it more of an inclusive holiday.”

Lynn, who uses their/them as personal pronouns, is disheartened that her pronouns are not always represented in the Valentine’s Day gifts they see.

This won’t stop Figueroa who came up with a creative homemade gift for her girlfriend.

“This is the greatest thing I have ever done in the history of my life. I didn’t even Pintrest this idea,” Figueroa said. “It’s called ‘Feelings Ft. You’ and it’s a book full of poems that I wrote about her, us and my feelings for her.”

While Figueroa will be focusing on having her memorable romantic night, Belfer — an actress in the Vagina Monologues — will be spending her evening another way.

“I usually do something nice for my friends because I love them tons and want to show them that and I don’t want them to feel alone or isolated in any way,” Belfer said. “This year, I have the Vagina Monologues, so I am excited to fight for women’s rights and people of all gender identities.”

While Belfer has plans for her holiday, the GLC does not.

“A number of [LGBTQIA] people are doing a Galentine’s or Palentine’s day for their friends or significant others,” said Matthew Antonio Bosch, director of the GLC. “But from the center we just felt there are a lot of other things going on.”